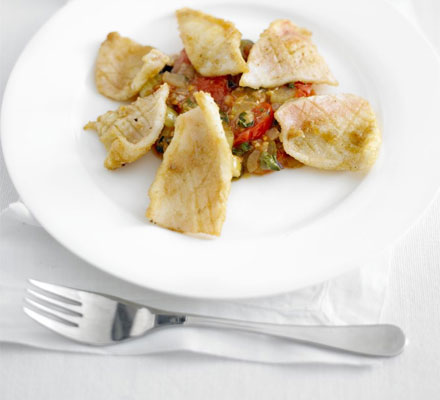 Squid is cheap, plentiful, quick to cook, and delicious with the classic Italian vegetable dish, caponata

Caponata
Caponata makes a great sauce for pasta and is also wonderful with griddled tuna steaks, roast chicken, or pan-fried British veal or pork.Get ahead
The squid can be prepared, scored and cut into pieces the day before, ready to be floured just before frying. Tomato-based recipes like the caponata taste better when they have been left to stand, then served lukewarm – this gives the flavours a chance to develop and harmonise. You can make the caponata a day ahead, then simply reheat until warm rather than piping hot. If making in advance, add the basil just before serving to keep its freshness.