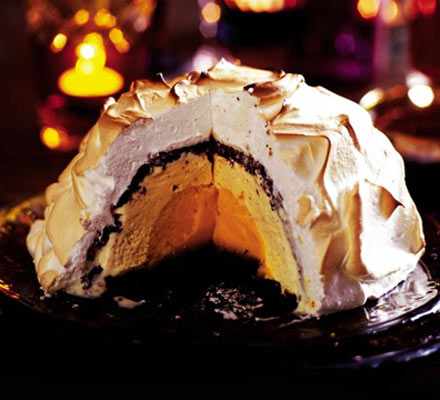 This twist on baked Alaska looks simply stunning – and the dark chocolate and orange flavours are just as good. Try it for Christmas, Hogmanay or New Year

Making ice cream by hand
To churn ice cream by hand, mix the custard base and marmalade together, then freeze in a plastic container for about 90 mins until it starts to freeze around the edges. Stir well with a fork, mashing up any frozen pieces, then repeat this process twice more until the mix is smooth and thick.Making it quicker
Buy two 600ml tubs of best vanilla ice cream. Allow to soften in the fridge for 30 mins, then beat in the grated zest of 1 orange and 5 tbsp marmalade. Use as in step 5. You can also use a bought chocolate cake.Making it sparkle
Pop a few mini sparklers on top and light just before serving. They cost around £2 for a packet of 10. Try tablematters.com or Paperchase.
MPU 2