Molecular gastronomy is not all about dry ice and a bunch of tricks, says Ross Clarke, former creative development chef at Fat Duck experimental kitchen and protégé of Heston Blumenthal. Ross Clarke is the kind of chef that likes to keep busy at all times. When we caught up with him on a recent trip …

END_OF_DOCUMENT_TOKEN_TO_BE_REPLACED 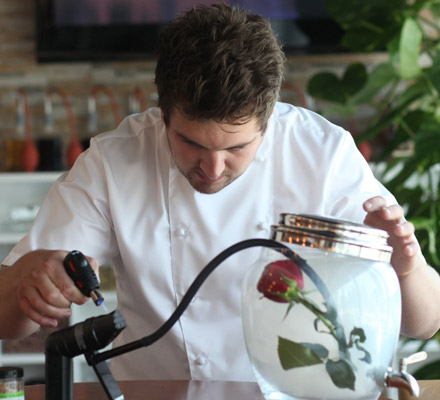 Molecular gastronomy is not all about dry ice and a bunch of tricks, says Ross Clarke, former creative development chef at Fat Duck experimental kitchen and protégé of Heston Blumenthal.

Ross Clarke is the kind of chef that likes to keep busy at all times. When we caught up with him on a recent trip to Dubai, he had his hands full with all sorts of quirky equipment, juice mixers, and a fishbowl of cold water and tea leaves he was attempting to make into a tea jelly!

Ross began his career right at the bottom of the ladder, as a fishmonger for Verveine Fishmarket Restaurant, where he later became a chef at the age of 21. He worked his way up to the top, having worked at Segreto, Madinat Jumeirah right here in Dubai for a brief period in between, and at a one-Michelin star seafood restaurant, Jetty in Christchurch, UK. Although he’s only been a chef for just six years, he’s come a long way, and counts working with eminent celebrity chef Heston Blumenthal from The Fat Duck, whom he worked closely with as a creative development chef for over a year until recently, as one of the most important feathers in his cap.

Ross now heads up his own consulting company where he spends most of his time in the lab, developing recipes, or conducting home demonstrations in London and Dubai, where he teaches home chefs how to use professional equipment and techniques such as sous-vides, dehydrators and matching food molecules. “Most people don’t know that molecules in certain foods match and as a result pair well together. Carrots and thyme are a great combination, for example, so is white chocolate and caviar,” he says.

Even though Ross’ field of work does fall under what has come to be known widely as molecular gastronomy, the chef tells us that the term isn’t something he is particularly fond of. “It’s just cooking. The only difference is that nowadays we know more than we used to. I like to refer to molecular gastronomy as modern-day cooking. If you can’t cook basic food, you can’t do modern. It’s as simple as that,” he says. Here we find out how he defines his particular line of work.

You have most recently worked with Heston Blumenthal, the pioneer of molecular gastronomy. What was the experience like and what made you leave?

It was great and I learned a lot! Three weeks after joining the restaurant, I was put onto trial and got a job from that. In that time, I helped devise dishes for Heston’s TV shows and conducted lab experiments and external development with big companies such as McVitie’s and Waitrose, where we developed the product for brands. I left The Fat Duck to start my own venture as I felt it was the time to do so. Working with Heston was amazing! He’s one of the nicest people I’ve ever met, and has one of the best palates and creative minds. I worked for a year and a half with him, but the exposure I got within that span of time is great.

I like taking classics and reinventing them. It’s fun to play around with food and even though I love classical cuisine, I think people shouldn’t just stick to it, but broaden their cooking style more. Food is all about the fifth taste – Umami.

When people think of molecular gastronomy they probably think dry ice! Would you agree that there’s more to it than just that?

Definitely! A lot of times chefs use dry ice for the sake of it, but the key is knowing how to use it in food and cocktails. I think dry ice is best used with good smelling notes of alcohol. Sometimes chefs use it just to make food seem appealing on the table, but when you smell the dry ice, it has no aroma and sometimes even smells bad. Modern cooking is not about gimmickry, it’s more about re-invention, playing with textures and making jellies and powders out of foods that you don’t generally think of, for example. The concept is to challenge and tantalise the diner’s mind. But nothing can replace the foundation of key skills, which every chef should have. Only then can you use all this equipment to achieve the results you want – you have to know what result you want in the first place, and that comes with the fundamental knowledge being good.

What are the latest trends in, as you describe it, modern gastronomy?

I think we’ll be revisiting classical techniques, by using butter for sauces and possibly making jellies out of sweet corn purée and such. It’s about making food taste like the classics, but look modern. Don’t forget, people still love good, tasty food.

So, when chefs such as yourself go into the kitchen, what exactly do you do?

The lab is our kitchen. We spend hours there, designing and creating new dishes or concepts.
The whole process is a bunch of ideas where we work with new flavours and ingredients. It usually takes anywhere from six months to five years to create a dish. We do have chefs tasting at all times, but like to take our time when perfecting a dish.

Where does your inspiration stem from?

Everywhere! I recently went to Vietnam and came across smoked noodles. The minute I got back home, I went into the lab and tried to create smoked pasta. I find that mistakes are sometimes the best ways to come across a new certain flavour or innovative dish. I once burnt a batch of cucumbers and leeks and really liked the taste. I take ideas from everything I see, I embrace it and get creative. I think if you’re self-driven and eager to learn, you make yourself better as well.

Do you think that certain aspects of molecular gastronomy can be translated into the home kitchen?

Yes, of course. I know a lot of people who have purchased dehydrators to make fruit leathers, and the sous vide to make stews and basically just eat healthy and keep the ingredient’s nutrition intact. I personally like working with the Thermomix, a super-fast food blender and processor, as you can use it to blend baby food and make jellies. I also like the Pacojet, a vertical food processor that needs minimal food preparation to make peels, 100 per cent natural sorbets and stretchy
textured ice cream, among other things.

What’s next on the horizon for Ross Clarke?

I’ll be visiting Dubai in November again to do a few demonstrations and cooking classes. I’ll also be available for training sessions at home.

A look at some of the typical equipment you’ll find in a molecular gastronomy kitchen: