Gastronomy is something of a family heirloom in the Rostang household. But, that didn’t stop fifth generation chef and multiple Michelin star holder Michel Rostang from being one of the humblest chefs. He comes from a family of restaurateurs, so becoming a chef was an inevitability for Michel Rostang. As he himself admits, “I can’t …

END_OF_DOCUMENT_TOKEN_TO_BE_REPLACED 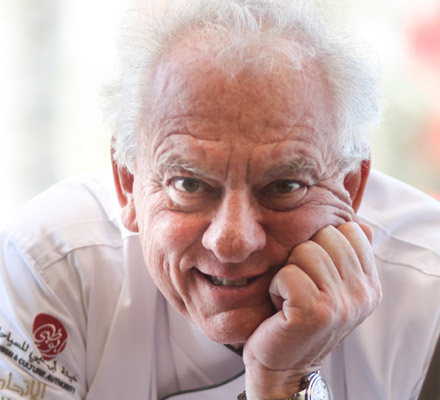 Gastronomy is something of a family heirloom in the Rostang household. But, that didn’t stop fifth generation chef and multiple Michelin star holder Michel Rostang from being one of the humblest chefs.

He comes from a family of restaurateurs, so becoming a chef was an inevitability for Michel Rostang. As he himself admits, “I can’t imagine not being a chef. It’s natural, I’ve been living and breathing food since I was a baby.”

With seven restaurants, and over 30 years of cooking under his belt, many might say it’s time for him to enjoy the retired life. But the passion and energy reflected in his intense, yet friendly, blue eyes tell a different story. That Michel, although ably aided by his two daughters Sophie and Caroline in the management of his restaurants, is far from hanging up his apron. Still very much a hands-on cook in the kitchen – a refreshing change from other celebrity chefs who lend little to their restaurants other than the name – his food is as much a work of art (his desserts, for example, rightfully come initialled with pastilles saying MR) as they are indulgent for the tastebuds. And the reason for this seems simple – he is driven more by his love for food than the celebrity aspect of being a top chef, by a no-nonsense, traditional approach to food rather than unnecessary gimmickry, and this comes through clearly when he speaks. Excerpts from my chat with him:

Q. Your food has been described as being classical and traditional. How do you see it yourself?

A. My way of food is traditional. My food doesn’t have more than three tastes in a plate – when there are too many flavours, I cannot recognise it. I prefer to have two-three, or even just one strong taste, which you should be able to identify blindly.

Q. You are known for celebrating the ‘ingredient’ and seasonality in your cooking. Would you say that is fundamental to your culinary philosophy?

A. Absolutely, food should be of the season. Take truffles, for example. If you eat something everyday, it makes you blasé. It gives you pleasure to find something after a gap!

Q. You have been credited with bringing bistro-style dining into French gastronomy. What was your thought process behind doing this?

A.Yes, a lot of chefs are doing bistro style in France now. I was the first one to do it, 26 years ago! It was a challenge then, to change the mindset of people. Basically, the idea is, you get the same quality of product as you would in a gastronomy restaurant, but the ambience is more casual, friendly, and prices are lower. This style of dining is becoming more popular, as nowadays, no one has the time, nobody has a jacket to wear to a restaurant! The ambience and décor is important for relaxed dining, as only 50 per cent of a restaurant’s success lies in its food. In a bistro, you need one chef to make a plate, but in a gastronomy restaurant, you need five. We can still cook old-fashioned dishes, but we have to adapt to modern lifestyles.

Q. Speaking of modernity, what is your opinion on molecular gastronomy, which seems to be the path many chefs think they need to follow in order to make a mark? As well as being splashed all over media which seems to be what most celebrity chefs are busy with, nowadays?

A. According to me, in France, there are two cuisines – the good and the bad. I cook what I love to eat. Molecular gastronomy is an experience, but it’s not to my taste. If you ask me, if you make something, it should be real – food shouldn’t be produced in a lab. Similarly, all the trappings of being a celebrity chef – it is not my way to do it. I know it is important to be in the media, but it is not that important for me, personally. I have nothing against TV chefs however, to each his own.

Q. How would you describe your relationship with food?

A. It’s simple – good food is good life. I’d rather not eat, than eat bad food. And you don’t always need expensive ingredients – a sandwich, with some bread, butter and ham can make a great culinary experience.

Q. So, what would be your ultimate comfort food?

A. For me, each Sunday night is a roast chicken and pomme puree. I come from the mountains [Michel hails from Isère near the French Alps], so I’ve grown up eating a lot of fish from the lakes, and enjoy cooking with cheese and game too. And, I love fondue!

Q. What, according to you, is the secret to French cooking?

Q. How hard or easy is it to follow this philosophy in your Dubai restaurant?

A. We are also looking at using more local produce in my Dubai restaurant, but I think the care of the food has to be better – I was surprised at the conditions at the fish market, it needs air conditioning with such high temperatures!

Q. I hope the authorities are listening! Finally, what are your plans for the future?

A. I would really like for the Rostang legacy to be continued – my daughters manage the restaurants, but we don’t know what the next generation will do. For me personally, maybe we will open a new meat restaurant in Paris. But the concept needs to be figured out.

Michel’s guide to the four seasons: