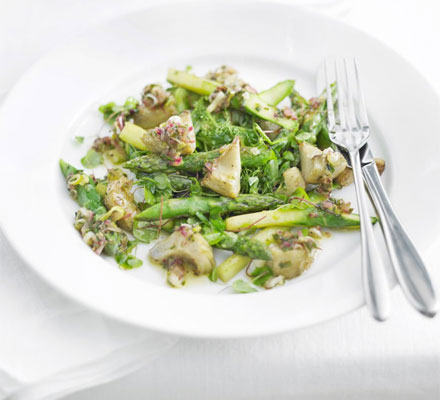 Tip
Preparing the artichokes involves a bit of work but they can be cooked and left in the cooking liquid up to two days before. The asparagus can be boiled and chilled the day before and both vegetables can be chopped, ready for frying, several hours before serving. As the dressing contains onion, it is best made just one hour before serving.Tip
Micro-leaves (also known as micro-herbs) are tiny little herb and salad leaf shoots. Their intense flavour lifts warm vegetable dishes like this and adds another element to the finished dish. Micro-leaves are now available from some supermarkets, but if you can’t find them, scatter over a few wild rocket leaves or tender sprigs of watercress.Tip
When you prepare artichokes, the metallic flavour of the raw vegetable is transferred to your fingers. Scrub your hands well afterwards, as the flavour is rather unpleasant.Tip
To test if the artichoke is cooked, insert a skewer or the point of a small knife into the centre – there should be very little resistance. If it feels a little hard, keep simmering; check again after each minute or so.Tip
Once cut, artichokes oxidise very quickly, which makes them discolour. So keep on rubbing the green flesh with lemon to stop this happening, especially the inner part of the artichoke once you have removed the hairy fibres. In my restaurant kitchens, we keep the uncooked, prepared artichokes in water with vitamin C powder (ascorbic acid) added – this doesn’t flavour the water – but a squeezed lemon works just as well.