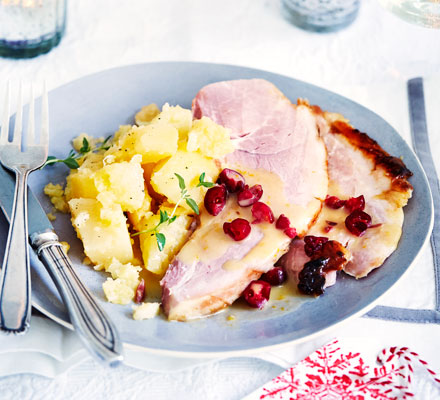 Add a festive, sticky and zesty glaze to ham, then serve with a sharp cranberry sauce which cuts through the smoky meat

When it comes to buying pork, I would only ever go British, as it supports our farmers and guarantees a high standard of animal welfare. It’s up to you whether you buy smoked or unsmoked ham, but I prefer the flavour of smoked. Some people find smoked ham too salty, in which case you will need to soak it to get rid of excess saltiness. It’s best to ask your butcher to advise on this. To soak, simply leave the ham in a large pan or bowl of cold water overnight, then discard the water and carry on as stated.

How to cook it

Boiling a ham this size calls for a large pan, such as a stockpot or preserving pan. If you don’t have a pan big enough, you’ve got a couple of options. You could buy a 3kg boned and rolled ham, which will be smaller but will take the same amount of time to cook and feed the same number of people. Alternatively, you could slow-roast the ham. To do this, heat the oven to 160C/140C fan/gas 3. Sit the ham in a roasting tin and pour over 600ml water. Add the aromatics, cover tightly with foil and bake for five hours. Cool and continue from step 2 of my recipe.

If you want to reheat any leftover ham, try mixing water, butter and a few herbs together in a pan to make an emulsion, then place thick slices of ham in it to warm through.