Step into Dubai’s newly opened urban jungle at Hotel Cartagena if you fancy a ‘Latin without borders’ experience, complete with a dose of upbeat samba players and plenty of tasty treats to try. Don’t be mistaken by its name, Hotel Cartagena isn’t actually a hotel – it’s a brand new two-storey restaurant and bar that …

END_OF_DOCUMENT_TOKEN_TO_BE_REPLACED 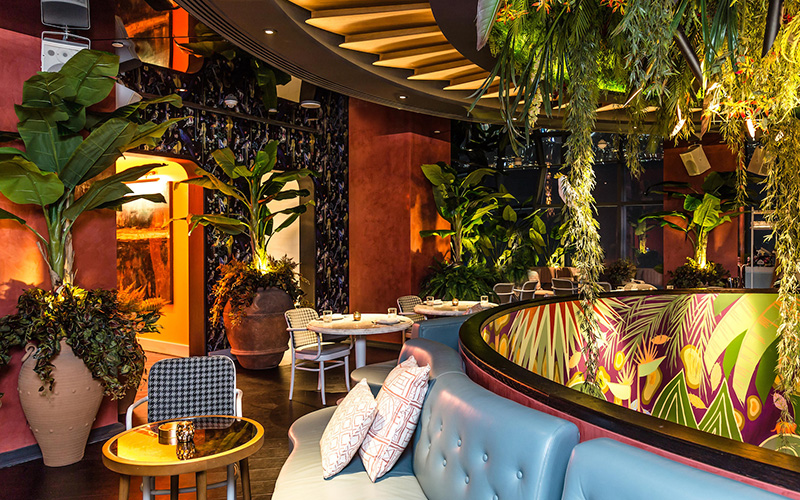 Step into Dubai’s newly opened urban jungle at Hotel Cartagena if you fancy a ‘Latin without borders’ experience, complete with a dose of upbeat samba players and plenty of tasty treats to try.

Inside, the exuberant, colourful space is alive with Latin American flair and vibrancy – expect neon lights, abundant faux forestry and strong hues of red, yellow, green and purple. The atmosphere is upbeat and so is the music, particularly when samba dancers and drum players come out to interact with guests – it’s a lot of fun.

Described as ‘Latin without borders’, the menu at Hotel Cartagena is made up of cuisine from places around South America like Puerto Rico, Brazil and Columbia. Headed up by head chef Geunsung Park, AKA ‘chef Pepe’, previously of Asia de Cuba, the kitchen here knows how to use spice – the food on offer packs some serious flavour.

Highlights on the menu include the braised beef cheek, sofrito and chipotle empanada to start – the tasty, meaty filling married perfectly with the light, doughy casing – but be sure not to fill up too much on these little delights as the red snapper ceviche is equally as good. For mains, the Brazillian picanha steak is a must-try; ours came served medium-rare with punchy chimichurri and black bean sauce. There’s also Jamaican jerk spatchcock chicken, which is moist, tender and full of flavour. On the side, don’t miss the roasted sweetcorn with queso fresco. To finish, the churros are a must. Served sprinkled in sugar, warm, crispy and slightly doughy on the inside these chunky churros come accompanied by two equally as moorish dipping sauces of chocolate and passionfruit curd – it’s safe to say the serving left us satisfied and licking our fingers.

Hotel Cartagena is a great spot to head with a group of friends for a fun evening with great, tasty food. The venue is now also hosting a lively brunch every Friday from 1.30pm to 4.30pm, with food served sharing-style to the table.

Details: Want to dine out? Contact +971 4 560 1799 or visit hotelcartegena.ae for more information. Check out this list if you want to find out more about new restaurant launches in Dubai this summer.