We set out on a culinary journey through France to discover one of the country’s most treasured products – cheese. 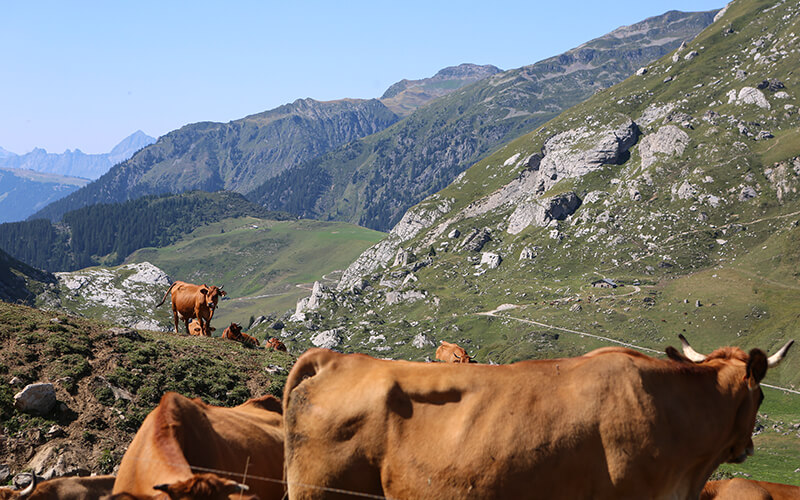 Nestled between Albertville and the astounding Mont Blanc massif, the valley of Beaufortain in the region of Savoie, France is a mecca for skiers and winter sports aficionados. However, over the summer months, the region favours a different kind of tourism, one founded on one of the country’s most treasured products – cheese. In 2019, France’s revenue in the cheese segment amounted to over US $11m, making it the first in Europe and third globally, whilst the average per capita consumption stands at 17.9 kg in 2019, 15 kg over the global average, as revealed by Statista. There’s no doubt the French love cheese.

It is during a bright and warm day in August, amongst a herd of Tarentaise cows grazing undisturbed in one of Beaufortain’s biggest Alpages, that I find out the secret ingredients that make French cheeses some of the best in the world: tradition and heritage. “Being an Alpagist is not a job, it’s life,” tells us Christian Juglaret, owner of the vast alpine pasture. 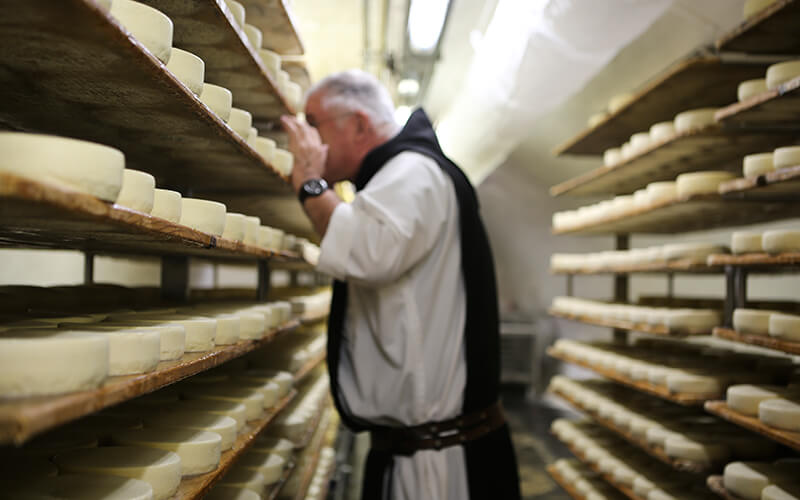 Juglaret is the president of the Coopérative Laitière de Haute-Tarentaise and an established producer of Beaufort, a flowery and buttery cheese named after the valley. As his father before him, he has dedicated his life to cheesemaking and lives in a chalet on the Alpages from June to November, which is when the temperature drops and the herd is brought back to its barns. A true Alpagist, Juglaret milks his cows twice a day, from the early hours until later in the day, before transporting the fresh milk to the production site in Bourg-Saint-Maurice, a small town at the bottom of the valley. To maintain the high mountain pasture’s precious biodiversity and prevent bushes from growing, the Alpagist needs to move the herd constantly – the Beaufort draws all its finesse and aromas from the grasslands and preserving the Alpage is a top priority for Juglaret. “Back in the day, when we produced Beaufort on site, the cheese had a different flavour depending on the location of the grazing. The cheese fully reflects what the cows are eating,” he explains.

As soon as the morning milking is finished, the milk is brought by truck to Bourg-Saint-Maurice to start the production of cheese. The Coopérative Laitière de Haute-Tarentaise is fully owned by 52 breeders who vowed to preserve the ancestral agropastoral practices and to respect traditions passed down from generation to generation. 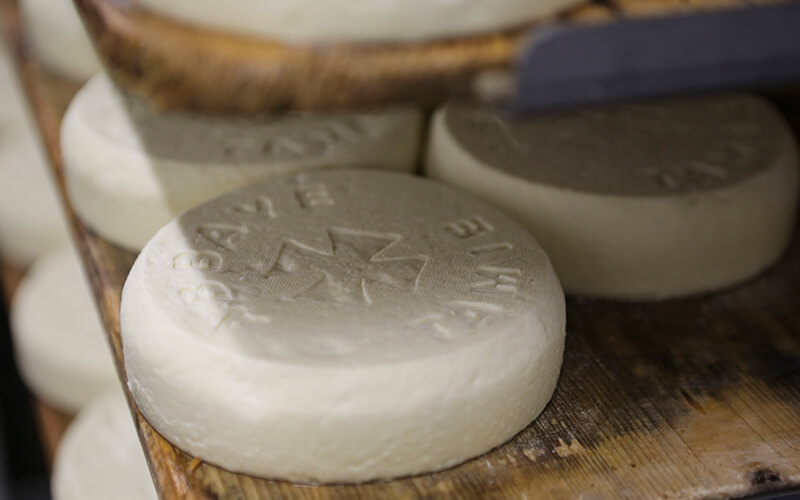 One wheel of Beaufort requires 400 litres of milk, and the final product can weigh between 40 and 42 kgs. Imposing copper vats contain the liquid, which is then mixed with rennet to separate milk into solid curds and liquid whey. After that, the cheesemakers will heat the curd to 54 degrees while constantly checking for the right texture. The cheese is then placed in traditional wooden moulds, pressed and salted to add taste and drain excess water. The Coopérative Laitière de Haute-Tarentaise can store up to 20 thousand wheels at the same time, ageing for about eight to twelve months, depending on the season.

The Beaufort d’été, made during summer, is very different from its winter counterpart both in flavour and texture: while the winter product is milder and softer, the summer Beaufort, thanks to the biodiversity of the Alpages, has a stronger and more flowery flavour, with a hint of acidity, and a buttery, yet firm texture. Depending on preference, both are perfect for a variety of different recipes, from cheese platter and fondue to pies, soufflés or salads.

West of Bourg-Saint-Maurice and the Coopérative Laitière de Haute-Tarentaise, a quiet Cistercian monastery rests in the green Bauges mountain range. Here, a community of 24 Trappist monks produces 400 kg of cheese every day, 160 tons a year – a thousand times less than the popular Comte. The Abbaye de Tamié, named after the Abbey, is a small cheese distinguished by the saffron colour of its crust, covered with a light white down once aged. Just like the Beaufort, the Abbaye de Tamié follows a longstanding tradition, and it’s only made in this small monastery in the Savoie region. The Abbey was founded in 1132 to welcome pilgrims and develop agriculture in the region, and its cheese tradition dates back to 1830. Today, it is one of only three French monasteries that produce and age their own cheese. The Abbaye de Tamié recipe originated from 19th century Cistercian monks at Notre Dame du Port-du-Salut Abbey, where the homonymous semi-soft, creamy cheese, Port du Salut, was produced. However, the Tamié today is much more similar in style to the famous Reblochon, or to the Tomme de Savoie. 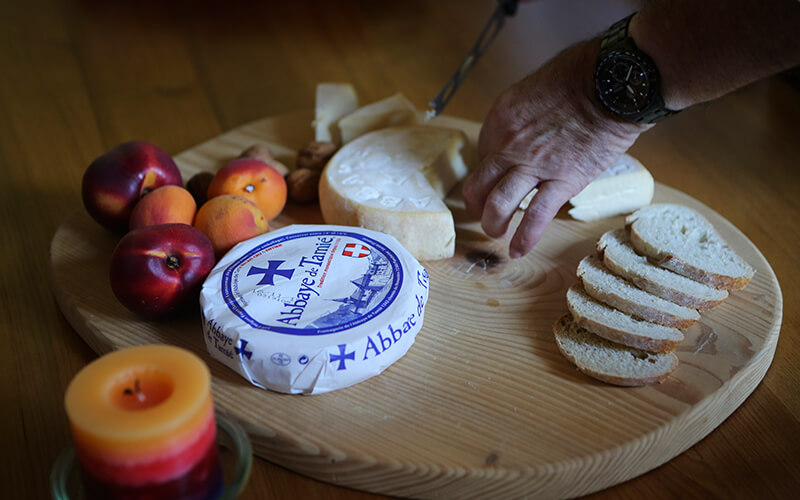 “We have been working hand in hand with the same farmers for over a century to make sure we only get the highest quality milk. To honour tradition, the milk is not pasteurised nor skimmed during production,” explains Brother Nathanaël, director of the Abbey’s fromagerie. Brother Nathanaël studied at one of France’s renown dairy schools and has applied his extensive experience to the production of Tamié for over 36 years. “Cheesemaking is a perfect fit to monastery life – we dedicate our days to masses, contemplation and cheesemaking,” he explains. He also highlights that cheese production is the main source of income for the monastery, and as such the monks have been perfecting their production to automate anything repeatable and save time and resources.

The Abbaye de Tamié is made in the morning with fresh raw milk and unmoulded later in the afternoon. Once salted for one to three hours to add taste and form a light crust, the small 1,4 kg or 580 grams wheels are placed in the caves underneath the 17th century monastery. These caves maintain a temperature of 13-14 degrees, with humidity reaching 95 percent. The Tamié is then left to age for about 4 to 8 weeks, to develop a mild and perfumed taste and creamy texture.