We go on a lunch date with a food loving personality to find out what makes them tick. 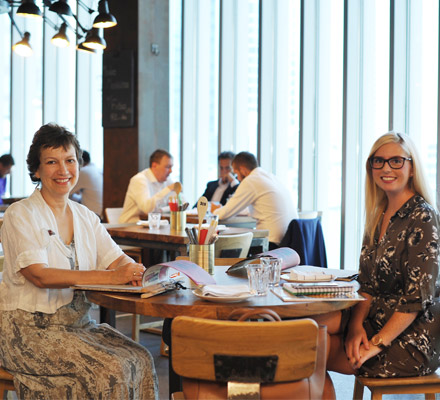 On the first floor of Dubai Marina’s hot spot, Pier 7, I met with ‘Will Write For Food’ author, Dianne Jacob for lunch at Fümé – a neighbourhood-style eatery. Having just flown in from the States for a working holiday in Dubai, the professional author, journalist, coach and foodie opened our conversation with a joke – instantly igniting a lunch date of laughter. As an internationally accomplished woman, the conversation was hugely enlightening and flowed naturally. Here are some of the topics from our chat:

“How I got here.” “It all began as a journalism graduate working for newspapers, before becoming editor of a restaurant magazine in Vancouver – and I had no idea what I was doing. I grew up with my mother cooking and we hardly ever dined in a restaurant. So, lets say I started in the food industry with a very quick education. After I moved to the States I worked on a number of magazines and started reviewing restaurants as a side job. Following a turning-point experience with a crazy boss, about 18 years ago, that’s when I realised my obsession was food and became self-employed.”

“Will Write For Food.” “Now in it’s tenth year, I’m the proud author of the multiple award-winning book, Will Write for Food, which is a complete guide to becoming a food writer and blogger. I’ve always loved being a coach and this book allowed me to express that through words – it’s even used in universities. I never expected for it to get to where it is today, and it’s all down to a friend’s advice at a party.”

“Be different!” “I’m not a big fan of people who have food blogs with the theme ‘I love food!’ In my teachings I encourage people to be specific – which is difficult because food bloggers tend to be huge food lovers, who want to write about everything. The problem is that everything looks the same. If there’s no focus, it just doesn’t work. If a blogger wants readers and they want to stand out, they can’t have the same blog as everyone else – they have to be different. If you want a book deal, you’re not going to get one when competing in the genre category ‘general cookbook’.”

“Food in the Middle East!” “I’m just in love with food in the Middle East. My husband is Lebanese, so we are always on the look out for good places to eat back home, but it just doesn’t compare. Last time I visited Dubai we dined at a Lebanese restaurant that whipped the hummous, and I just wanted to drown myself in it! People think the States has every cuisine imaginable, which perhaps it does, but it’s not always done right. It’s becoming a big thing in the States, and there’s a growing market for Middle Eastern cook books now as availability of ingredients grows.”

“I cook Italian, it’s easy.” “When I cook, I tend to opt for Italian because it’s easy, or sometimes Asian. But if I were going out to eat it would hands down be Middle Eastern food – that’s probably why I’m so excited to be here in Dubai! My parents are Middle Eastern, so I grew up with the cuisine.”

“What’s on your table?” “There’s an orphaned quince tree down the road from my house, so if I were to host a dinner party, I’d made couscous with sautéed quince and chicken. Followed by a cake, of course! I love baking. I made a yellow cake recently from scratch that was three layers high with chocolate icing – it’s got to be one of the greatest things I’ve ever made. You can always justify making a cake as leftovers can be frozen.”

What we ate: In a comfortable, laid-back environment, lunch began with a flavoursome dish of naked crab with cucumber, lemon and sourdough bread, followed by hot smoked salmon, cooked in a deliciously tasty teriyaki sauce with pickled cucumber on the side, plus a mouthwatering whole grilled, fresh sea bream – all to share – with grilled Portobello mushrooms and thick potato wedges, served with a dollop of sour cream. It’s safe to say we were both easily able to skip dinner that evening, particularly after indulging in a dessert, scandalously entitled “girls, 12 inches of pleasure – salted caramel chocolate éclair.” Despite the name, we both agreed, it’s definitely one to try!