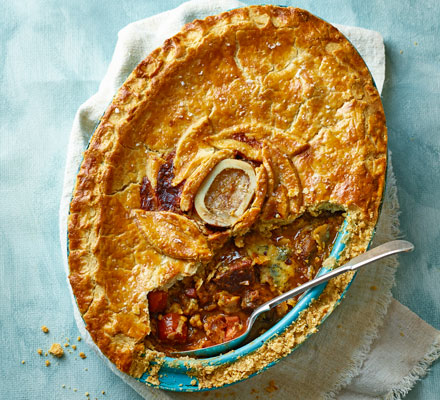 Bake a comforting steak pie with tender meat, a deeply savoury gravy and molten blue cheese for an extra hit of flavour. The ideal winter warmer

It may seem extravagant to buy both for this pastry, but it’s worth it. The butter adds flavour and the lard keeps the pastry short and crumbly. Make sure you don’t skip the chilling, as it makes the pastry much easier to handle.

Use a piece of marrowbone as the pie funnel – you can get one from your butcher. Measure the depth of your pie dish, then ask them to cut it to the same length. A regular pie funnel, piping nozzle or egg cup will do the job, but the marrow adds a meaty flavour. If you’re into double carbs, scoop the marrow from the bone once cooked and spread on some bread to dip in the gravy.