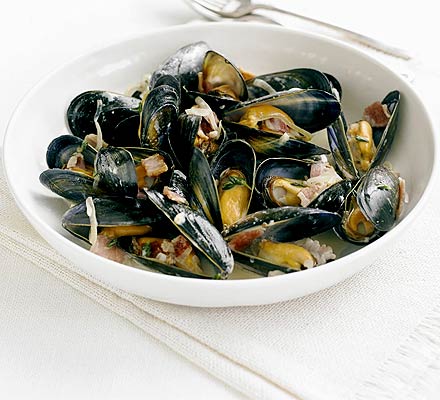 Contains pork – recipe is for non-Muslims only
Mussels are much easier dish to serve up than people realise. Try this easy dish, read the tips, and impress your friends

Storing live mussels
Don’t leave them wrapped in a plastic bag (they can suffocate), or soaking in water, as chemicals and the lack of salinity (salt) can also kill them. Instead, keep them in a bowl, lightly covered with damp kitchen paper, in the bottom of the fridge – not too cold or they won’t last as long. They can then last up to five days – although you should expect to lose quite a few over this length of time, so it’s best to eat them on the day of purchase.Buying the best
Mussels in the shell are sold either alive or pre-cooked. They’re available out of the shell as ‘mussel meat’, or brined or pickled in cans. For cooking, you really want live mussels in the shell. Farmed mussels are a particularly good buy as they are often more appealing to look at and require a lot less scrubbing under the tap to remove barnacles. Live mussels are often sold pre-weighed in a net bag, and should be kept cool on the way home.