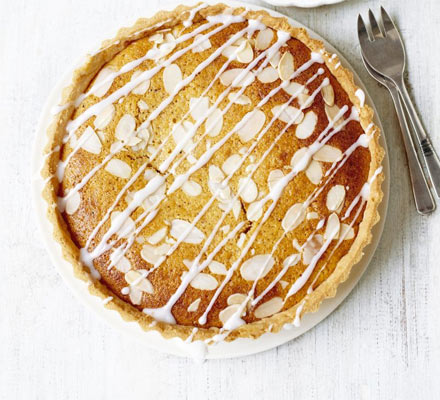 What if I...
Used 200g homemade pastry made with butter? The fat remains virtually the same as my healthy version, but the saturated fat rises to 5.7g per slice. Used 85g butter in the filling instead of yogurt and rapeseed oil? The fat would increase to 21.8g (9g sat fat) per slice.Flavouring tip
It’s worth using almond extract, as it has a genuine almond flavour, whereas almond essence is a cheaper version and quite unlike the real thing.How we made it healthier
To reduce the saturated fat, I used shop-bought pastry made with vegetable oil, which was pliable and easier to roll out thinly, so used less; We reduced the total fat further by using polenta to replace some of the ground almonds, then enhanced the flavour with almond extract; We swapped butter for yogurt and rapeseed oil, which reduced more fat, especially saturated fat. We also used less egg, choosing medium instead of large.