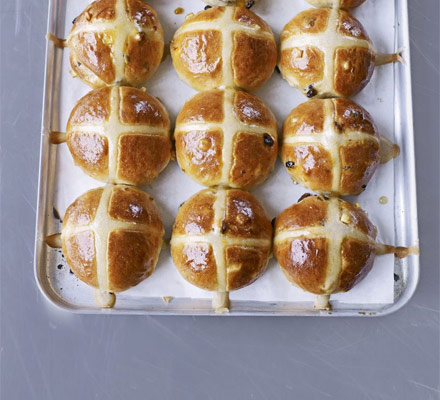 Yeast
I use fast-action or easy-blend yeast, which can be added straight to the dry ingredients. This is different from dried yeast which needs to be dissolved in liquid first.Piping the cross
Pipe the crosses over the buns slowly so that the paste ‘hugs’ the curves on each bun.Flour
Brands of flour can differ, so you might need to vary the amount of liquid. If your mix is dry and crumbly, add a splash more milk to bring it together.Equal size
I always weigh each lump of dough before shaping to make sure they are all the same size and cook evenly.