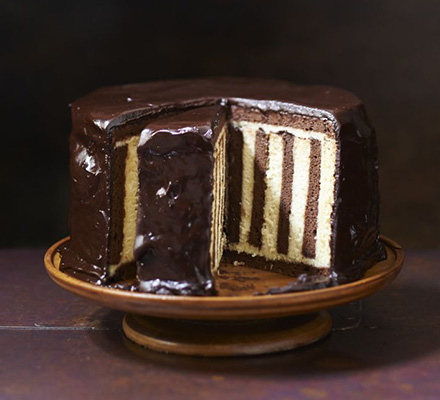 This sensational striped sponge requires careful assembly and lots of preparation to perfect the decoration, so set aside a good chunk of time in the kitchen. We’ve got a Guide to help you every step of the way, see the Tip box below

How to perfect your gateau

We have a comprehensive Guide to preparing, making, icing and assembling your gateau, including step-by-step images. You can find it here.

Divide your kitchen into zones

Create a lining and filling space and clear a table for cooling the finished sponges. Then make sure you have a bowl of soapy water ready for washing up. Find out more here.

What kit do you need?

Using up your leftovers

Use up your sponge trimmings in a trifle, or dice and freeze them in chunks. Find out more here.