Travelling to a remote Maldivian island, BBC Good Food Middle East explores the regional cuisine and the relationship between barefoot luxury and locally-sourced food “You have to taste a culture to understand it”, traveller and author Deborah Cater once said. And for the Maldives – a nation comprised of 1,192 tiny islands in the middle …

END_OF_DOCUMENT_TOKEN_TO_BE_REPLACED

“You have to taste a culture to understand it”, traveller and author Deborah Cater once said. And for the Maldives – a nation comprised of 1,192 tiny islands in the middle of the Indian Ocean – the sentiment certainly rings true. Local Maldivian folklore stresses the dependence the remote nation has always had on its raw produce. According to the country’s legends, thousands of years ago a sorcerer or ‘fandita’ cast a spell on the country saving the Maldivian people from famine by causing the first coconuts to grow out of the skulls of the deceased. Similarly, the country’s other vital food source – yellowfin tuna – is said to have been brought to Maldivian shores by the country’s great mythical hero Bodu Niyami Kalefanu a seafarer who travelled to the end of the earth to bring the valuable fish to the islands’ seas.

Fast-forward to the mid-20th century, and the Maldives quickly came into the international spotlight, when the first luxury hotels were built in the early 1970s. In the near-forty years since the first hotel was built, it’s not difficult to see why the Maldives holiday package has become so universally popular with the high-end clientele who can afford to travel there. Besides having the incredible picture-book golden beaches, clear blue ocean and five-star treatment, there is no exposure to ‘real’ life – the beach hagglers, fear of being mugged and all other nuances of normal travel are completely removed. To further the desert island fantasy, most Maldivian hotel resorts also operate on something they call ‘island time’ – a fabricated time zone one hour ahead of the capital, Male, which is used to detangle guests further from their ordinary lives. Upon arrival, guests step straight through the looking glass, to their own personal paradise. Most islands operate a no-shoe policy upon arrival, with staff playing drums and offering refreshing fresh fruit welcome drinks.

On Halaveli, the resort island by Constance Hotels that BBC Good Food Middle East visited, the luxury was palpable. Entry level rooms on the island are swish individual villas on stilts over the ocean, each with their own private plunge pool and staircase down to the ocean, while the high-end accommodation includes several different two-storey villas, with a private three by five-metre pool and expansive gardens. For ultimate relaxation, the island has its own ‘U-Spa’ offering up a five-star range of massages and facials. Like with any luxury service, it’s the small details that count, and at Halaveli’s spa the ‘small detail’ is the incredible glass floor beneath the treatment room, allowing guests to watch tropical sweetlip and bluestripe snapper fish swim by as they drift asleep during their massage. 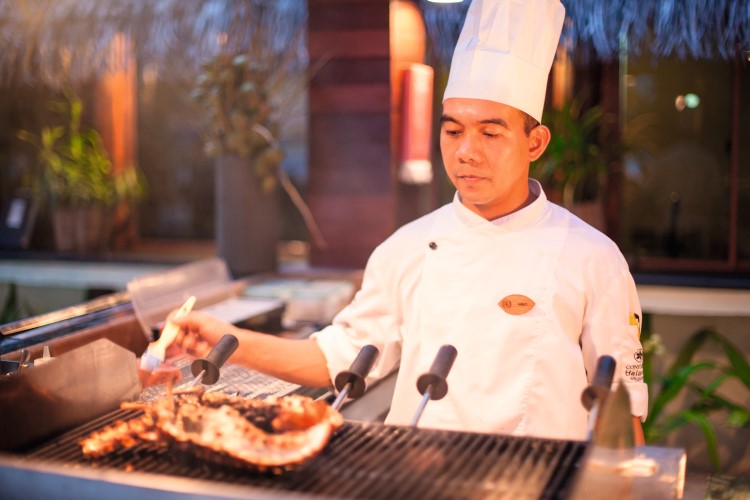 The CEO of Constance, Jean-Jacques Vallet, is passionate about good wines, – something that is tangible across all Constance resorts which each have a wide and well thought out range of red, white and bubby. The hotel’s cellar ranges from relatively unknown (but fantastic) vineyards such as Swartland in South Africa, to the highest old world vintages (Halaveil’s head sommelier’s expertise is a testament to the hotel group’s investment). The same level of luxury extends to the high-end food offerings at the hotel. The hotel’s main all-day dining restaurant has a different themed night each day of the week, serving everything from Japanese wagyu beef to froi gras and escargot. Jing, Halaveli’s fine dining restaurant includes a private back room, which allows guests to have a private dining party should they wish, while drinking the finest vintage French bubbly – indeed in this dining room you could be anywhere in the world.

It goes without saying that you’re not going to find the best wagyu beef in the world, in a country over 1,300 miles off the Indian coast which in its five-thousand-year history has never reared beef. You can find a goodsteak at Halaveli and other Maldivian resorts – due to the five-star chefs and a regular stream of international imports. But like most countries, if you want the best food available, you look to what is readily and locally available. 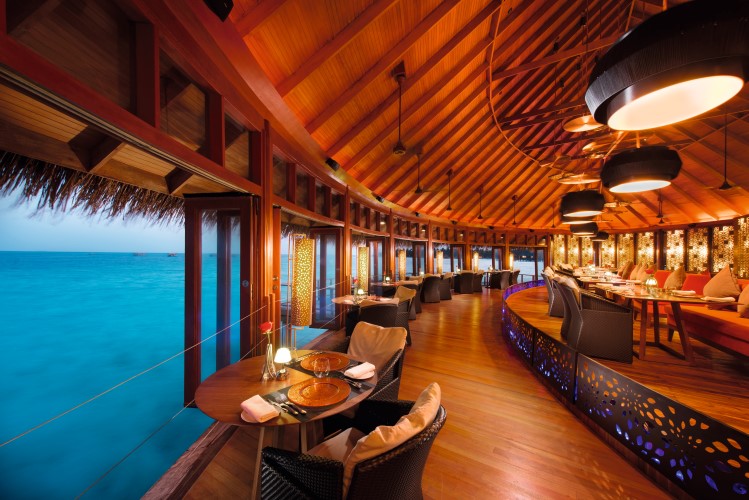 “We still serve food the Maldivian way,” says Tanveer Ahmeed, chef de cuisine of Jing restaurant. The key ingredients in Maldivian food are coconut, tuna and the scotch bonnet pepper. “The pepper is only for the more daring guests – it’s far spicier than those available in neighbouring India or Sri Lanka”, says Ahmeed. Despite being one of the premium brands in the Maldives, Halaveli champions local ingredients. “If we want to serve tuna or red snapper on the menu one evening, we have to call up the local fisherman the night before, so his team can catch the fish in the morning, and boat them in to the hotel that afternoon,” he says. Keen to share his enthusiasm with foodies visiting the island, Ahmeed also offers cooking classes for guests interested in learning to make Maldivian curry or ‘mas huni’ (a type of Maldivian salad served at breakfast time), while guests who want to catch their own supper, can join one of the daily traditional sunset fishing trips organised by the hotel. 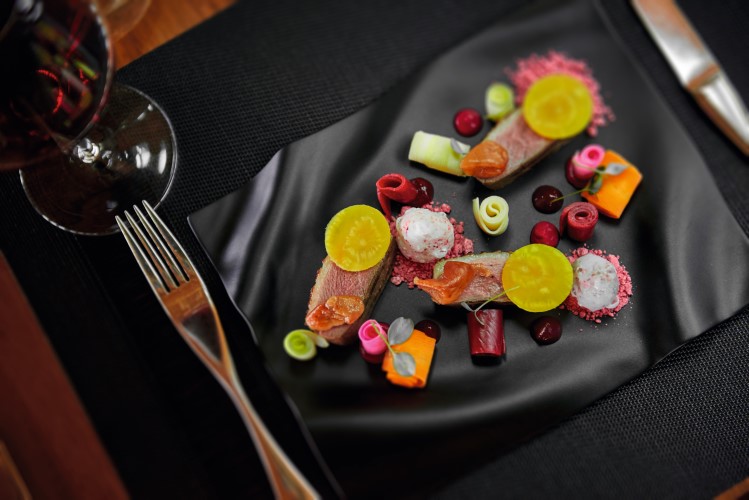 Equally, the best excursions on offer at Halaveli, bring you closer to traditional Maldivian life. There are daily snorkelling trips to the nearby reefs where you can swim alongside turtles, manta, whale sharks and occasionally dolphins.

The last afternoon BBC Good Food Middle East was on the island, a boat load of Maldivian tuna, was put on a truck: 12 yellowfin tuna lined up. That evening on the balcony of Jing restaurant, with views over the Indian Ocean, sting rays, manta and sharks swimming in the dim evening light beneath the restaurant, raw Maldivian tuna is served to the table with watermelon reduction. The simple, water reduction, and fresh flavour, from the fish the Maldivian fisherman caught that morning. Local and luxury at its best.

Emirates, FlyDubai and Etihad fly twice daily from the UAE to Male, Maldives. Hotels organise boat and air transfers from Male to the resorts. For more information about staying at Halaveli visit their website constancehotels.com.