Australian celebrity chef and now Dubai restaurateur Greg Malouf tells us how he went from not even being able to spell ‘chef’ to becoming a world renowned ambassador of Middle Eastern cuisine, reinterpreting the traditional for modern palates. He doesn’t look the part at all. With his twinkling eyes, wide smile and portly demeanour, mild-mannered …

END_OF_DOCUMENT_TOKEN_TO_BE_REPLACED 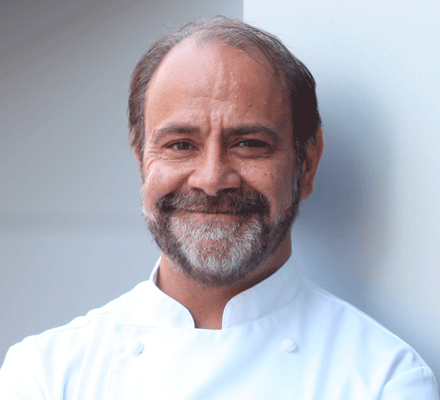 Australian celebrity chef and now Dubai restaurateur Greg Malouf tells us how he went from not even being able to spell ‘chef’ to becoming a world renowned ambassador of Middle Eastern cuisine, reinterpreting the traditional for modern palates.

He doesn’t look the part at all. With his twinkling eyes, wide smile and portly demeanour, mild-mannered Greg Malouf resembles a benevolent grandfather more than he does a globe-trotting celebrity chef. But don’t be fooled, underneath that kindly exterior lies an astute, creative brain and skilled pair of hands that have singularly transformed the perception of Middle Eastern cuisine in the western world.

Coming from a Lebanese immigrant family, the traditional Middle Eastern flavours were something he’d grown up with. With a childhood surrounded by aunts, grandmothers and great grandmothers all coming together to cook, share and eat on special occasions, Greg was always surrounded by good food. Although back then, he was barely allowed into the kitchen, let alone being given an opportunity to cook. “I had a massive appetite, I think that’s what brought me into cooking. Whenever I entered the kitchen, I’d pick at whatever they were making,” he confesses. “So, I’d usually be given a few little treats and ushered away.”

But it wasn’t a direct transition from this wholesome childhood picture into chef’s whites. From never having created anything more complicated than putting things together from the fridge, at 16, Greg, who had reached a crossroads in his young life, decided he wanted to cook. He ran away from home in Melbourne to Sydney, leaving a note with a friend saying he “wanted to collect his thoughts and become a chief (sic)”.

Sure enough, he came back to join the William Angliss Institute, a specialist centre for culinary training, completing a four-year course in three, while simultaneously doing an apprenticeship in a Mexican restaurant in Melbourne. The moment he put his chef’s jacket on, he “loved it” and knew this is what he’s meant to be doing. While he doesn’t credit his mother for influencing his ‘Modern Middle Eastern’ culinary style – “she made regulation Lebanese food; my dad, who cooked on Sundays, was much more experimental,” he says – cooking skills must have been running through his DNA, as otherwise, his brother wouldn’t have turned into a successful restaurateur in Melbourne as well; he owns the family-run Zum Zum restaurant in Melbourne.

In fact, his parents weren’t very happy with his career choice at that time – being a chef wasn’t as glamorous in Australia in the early 90s, as it is now – but they came around when they saw he was happy. And his success could have had something to do with it as well. Which he self-deprecatingly credits to largely being at the right place at the right time. “I was doing things that were fairly unusual for that time, food journalists got wind of that and started following my career, the momentum gained from there,” he says.

These unusual things include things like making kibbeh with salmon and putting watercress in tabbouleh – “My mum was in disbelief,” he laughs – with the over-arching intention of bringing Western techniques and flair into Middle Eastern cooking. He describes his culinary philosophy thus: “Taking Middle Eastern food and best of Western techniques, and reinterpreting the dishes of my childhood.”

Having worked in Europe and also Hong Kong throughout the 80s, he honed his skills to come back to open his first contemporary Middle Eastern restaurant, Momo, in Melbourne in 1991 which rapidly garnered two hats from the Australian Good Food Guide (Australia’s equivalent of Michelin stars). Since then, there’s been no looking back. With six books and two successful restaurants – he left MoMo in Melbourne to work in the UK at Petersham Nurseries Café, Richmond, during which time the restaurant was awarded a Michelin star – under his belt, he has established himself as one of the world’s foremost experts on Middle Eastern cuisine.

And now he appears to have come full circle, having moved lock, stock and barrel to Dubai, to work on a new restaurant in DIFC – slated to throw open its doors soon. “I’ve always wanted to cook in the Middle East. When I was offered this project, I thought, there’s a part of the world I’d like to live in,” he explains.

This decision can appear to be in equal measures logical, as well as bold. After all, there are more Middle Eastern, particularly Lebanese, restaurants here than you can shake a bowl of hummous at. What does he bring to the table (pun unintended!) that’s different? His new restaurant, will have three styles of menus – a la carte, a sharing/banquet menu, and a mezze menu. It will be high-end fine dining, combined with a lounge area and an outdoor area with shisha and daybeds. “I think it sits between high-end and accessible,” he says. Which makes it quite a unique proposition to start with.

Then there’s the food he’s known to serve up. Although he’s led by his Lebanese palate, he has travelled extensively around the region to acquaint himself with the nuances and differences of each cuisine. “There’s a common thread running through, from Persia to North Africa – one of generosity. The other is the aromatics and spices that originate from the spice trade routes,” Greg says. “However, each country has a different way of doing things – the way a dish is spiced, and even the way they are eaten. One needs to have respect for these differences.”

Celebrating and respecting these differences is something Greg has done successfully with his cookbooks, which he has been co-writing with his (now) ex-wife Lucy Malouf, who he continues to share a good working relationship with. Arabesque (Hardie Grant books), their first book, was published in 1999, and since then, with books like Saha: A chef’s journey through Lebanon and Syria (Quadrille publishing), Moorish (Hardie Grant books), Turquoise (Chronicle Books) and Saraban (Hardie Grant books), he not only chronicles the culinary traditions of the larger Middle East region, but also brings a refinement to it that opens it up to a wider audience.

“Most of the cuisines in this region are peasant or street food, it’s food of the homes. Turkey is the exception, Ottoman cooking is of the palaces,” he says. Bringing European refinement to this home-style cooking is his particular brand of modernism. “It’s food of the region as seen through my eyes,” he muses aloud.

Which then brings presentation into the picture. Something he has a knack for. “The visual aspect is very important of course,” he says. “If something looks scruffy on a plate, you’re already on a wrong foot with the customer.” However, for someone who spends many sleepless nights thinking about presentation, Greg understands the importance of substance over style. “You’ve got to think flavours first, then find an attractive way to present it,” he says. “I spend a lot of time trying different ways to present a dish, but I spend even more time thinking about taste.”

“My process is that I take a dish, go through the ingredients, take something out, and substitute it for something else,” he continues. “I pull dishes apart and reconstruct them in a new way. It’s a lot of trial and error.”

Errors are something that Greg isn’t afraid to admit to or learn from, having endured his fair share of failures in the early stages of his career. “When you’re younger, you tend to put a lot of things on a plate, and flavours can get out of balance,” he says. “When I came back to Australia in 1991, I had a lot of ideas, and wanted to express what I learnt, and draw some of my heritage into it. Luckily, I learnt about restraint at an early age.” Restraint is something young chefs often lack, he observes. “New chefs need to understand they can go on a great journey, putting a bit of their character and personality into their dishes,” he says. “At the end of the day, food is about putting a bit of yourself on a plate.”

Greg continues to put a bit of himself out there not just in the plates he serves at restaurants, but also through his cookbooks. His next one is due out in November this year, which will focus on Middle East vegetarian cooking. “It will be elaborate, contemporary and with lots of pulses, legumes, grains, and spices,” he promises. Spices are something he has a particular passion for, evident from his particularly delicate use of them in his cooking; he has a high-quality spice mix range of his own, Malouf’s spice mezza, that he will be retailing at his Dubai restaurant too. Then, there’s another book, which he describes as a travel cookbook, scheduled for 2015, which will be focused on the Arabian peninsula. After cookbooks, a natural step for most chefs seems to be TV. But the soft-spoken Malouf isn’t interested. Although he’s had TV appearances to judge various competitions and so on, doing his own TV show is “just not my thing,” he says. “I enjoy being in the kitchen a lot more.” And after all, between his books and restaurant projects, he needs a bit of time to do the favourite part of his job. Which is: “Dreaming… about putting dishes together.”