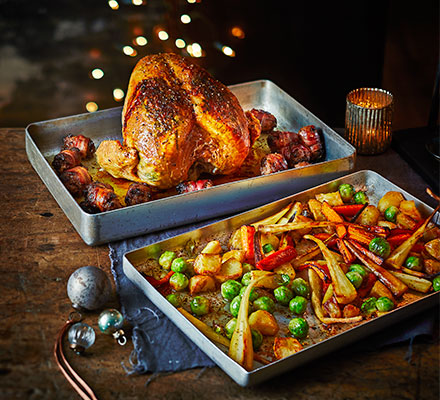 Make a fuss-free Christmas dinner with this two-tray method that includes stuffing, veg and the turkey. It's ideal if you have a small oven, and saves on the washing-up

If you prefer to serve everything separately, roast the veg in different sections of the tray so they’re easy to divide out.

Tip any leftover roasted veg into a food processor and blitz until finely chopped. Make into small patties and fry in sunflower oil until crisp. Serve with sliced turkey, warm gravy and stuffing balls.

Shred any leftover turkey then finely chop with some red chilli, garlic and coriander. Season the mixture with lime juice and soy and fish sauces. Spoon into lettuce leaves, top with any leftover chopped salted peanuts, wrap and enjoy.