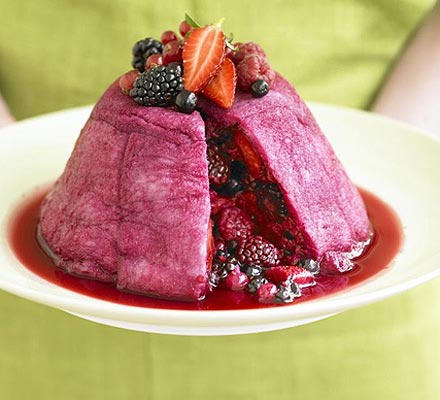 This quintessentially British pud, packed with juicy summer berries, is so much easier than it looks, perfect for beginners

Spiced apple berry pudding
Use spiced fruit loaf instead of white bread to line the basin. Heat sugar and water together, then gently cook 2 large peeled cored and chopped cooking apples for 5 mins until softened. Add 850g mixed blackberries, blackcurrants, redcurrants and raspberries and 1?2 tsp mixed spice and cook for a few mins until the fruit softens. Build the pud and serve with vanilla ice-cream.Equipment
1.25-litre pudding basin, cling film, sharp knife, chopping board, large pan, large bowl, large sieve, kitchen scissors, side plate, serving plate and one or two cans for weighting down.Apricot berry brioche pudding
For a decadent twist, add 3 tbsp cre?me de cassis or framboise to the sugar in the pan instead of water. Gently cook about 650g halved and stoned apricots in the syrup for 5 mins, then add about 650g mixed raspberries, blackberries and currants and cook for a few mins more. Line the basin with cling film as before then layer up the fruit and juice- soaked slices of brioche from a large loaf, rather than lining the sides with it. Wrap and weight down the pudding. Berries over cooked or white patches?
The best thing to do is add more berries, strawberries are best. If your bread is patchy, take the spare juice and spoon it over - people will never know.The sugar in the pan won’t dissolve?
It takes a lot longer than you might think to dissolve caster sugar. Be patient and keep the heat low. It’s ready when there’s no grittiness at the bottom when you stir.