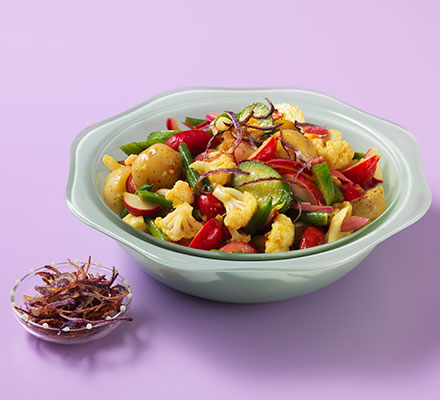 Combine piccalilli with potatoes, cucumbers and radishes, then top with deep-fried onions. It’s ideal as a picnic salad or side dish – just toss with the dressing when you’re ready to eat

The origins of piccalilli
We all love a bit of piccalilli with a slice of ham, and this humble yellow relish has been around since the mid-18th century. It was influenced by the East India Company and the spice trade, hence its use of traditionally imported spices, like turmeric. It was originally called ‘Indian pickle’ or ‘picallilio’, and any veg available were used in it. As such, it became the perfect pickle for preserving gluts of garden veg, such as cauliflower, onion and marrow.