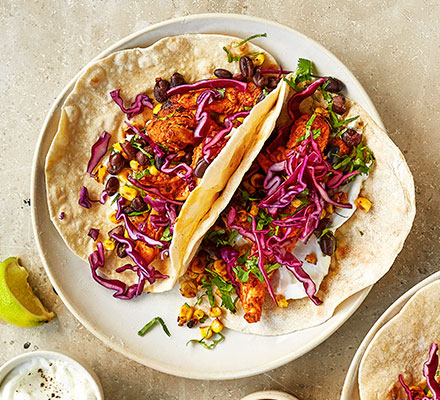 Dollop yogurt on the 2 large tortillas and top with the leftover chicken, sweetcorn mix, and any leftover cabbage. Add some shredded lettuce, avocado, or any veg you fancy. Roll up the tortillas, sealing the ends, and wrap in foil. Chill in the fridge until ready to eat.

Make your own taco seasoning

To make your own taco seasoning, combine 1 tsp each ground cumin, paprika, dried oregano and garlic granules with some black pepper and chilli flakes. Will keep in an airtight container for up to three months.

If you don’t want to make your own tortillas, shop-bought will work just as well. Simply skip steps 1 and 2.