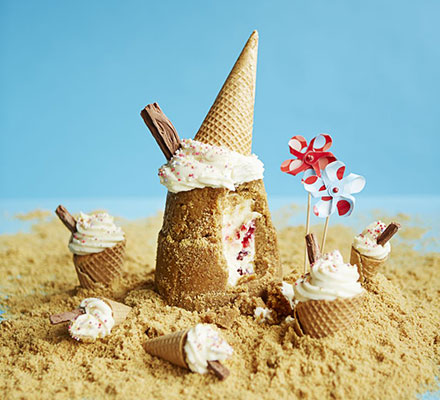 If you're feeling creative, this biscuit beach scene with vanilla cheesecake filling will not only look brilliant but will taste great too

Get your equipment ready – you’ll need a large tray or board big enough to assemble the biscuit beach. A piece of wood covered in foil works well. You’ll also need a medium sandcastle mould, and a small spade looks great for serving.

How many biscuits do I need?

Pop your chosen sandcastle container on the scales and return the scale to zero. Fill the container with water and note down the weight (our water weight was 1kg/2lb 4oz).

Calculate three-quarters of this weight – that figure is the quantity of biscuits you’ll need (for
our 1kg/2lb 4oz container we used 750g/1lb 10oz biscuits).