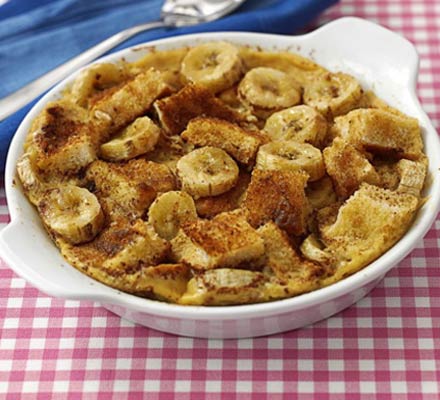 Make it in the oven
If you don’t have a microwave, assemble the dish without toasting the bread beforehand. Bake at 180C/fan 160C/gas 4 for 30-40 mins until the egg mixture has set and the bread has turned golden and crisp.Chocolate and orange flavour
Toast 4 thick slices bread, spread with 50g butter and 4 tbsp marmalade. Cut each slice into 6 equal pieces and arrange the bread, butter side up, with 85g roughly chopped dark chocolate and 50g chopped mixed peel in a microwavable dish (23cm wide by 5cm deep). Make the custard, as previous recipe, omitting the cinnamon, then continue with the rest of the recipe. Serve with a sprinkling of icing sugar and ice cream.
MPU 2