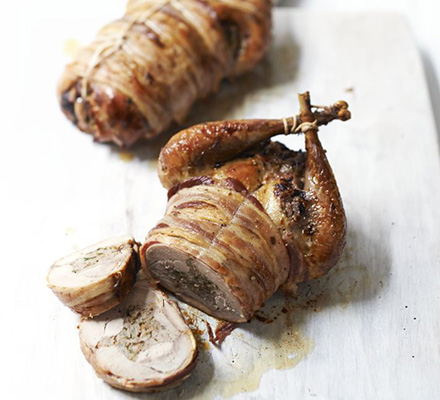 Contains pork – recipe is for non-Muslims only
We talk you through the technique of preparing poultry to create an impressive, easy-to-carve roast – ours is a boned and stuffed pheasant

Equipment you'll need to bone and stuff a pheasant

What knife to use when boning pheasant

It’s best to use a small, sharp boning knife with a blade that curves inwards near the handle. This will give you maximum control when scraping meat away from the bones. Otherwise use a small, sturdy knife.

What string to use when boning pheasant

It’s important to use robust and heatproof kitchen string (also known as butcher’s string) for tying the pheasant, as normal string could burn or melt in the oven, and ruin the dish.

Partridge in cider with apples & celery